Google Sniper – What Does It Actually Do?

Google Sniper is a system that claims you can make thousands, if not millions in profit – pay off your debts, quit your job and live like a king.

Being a little sceptical of so many of the claims these types of site make, and yet interested in it as an affiliate, I decided to look at the review sites and ‘scam’ claims. I googled the term and thought I’d relate back to you what I found in the first three results and my thoughts on how they can affect your judgment when searching for information. 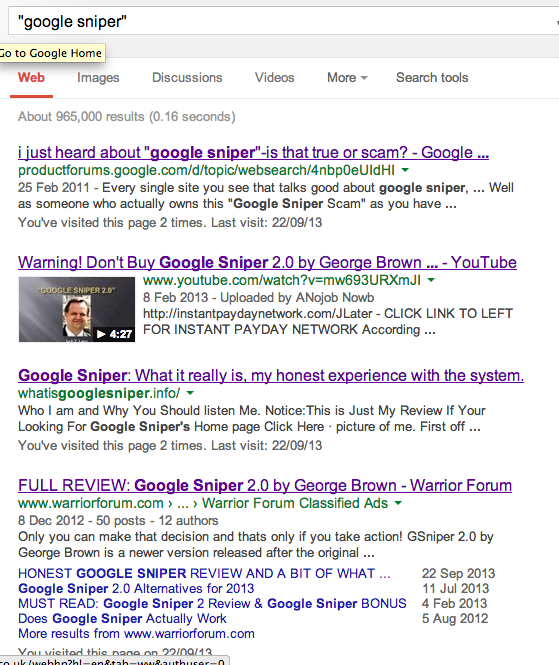 First of all, notice there are a lot of queries for this product. This was an exact search, i.e. the term is enclosed with speech marks “google sniper” Without the speech marks it would have looked for the words separately bringing back an extremely hefty search of 82,000,000. Nevertheless, 965,000 is a significant and shows a healthy amount of interest.

‘Google Sniper – Is it true or a scam’

This link took me to a forum and I was somewhat disappointed to see that  – of the 30 or so replies to this person’s request for advice, most were out of hand dismissals – ‘stay away from anything that…’  types of comment and obviously without any knowledge of the product. Not actually very helpful, just people revealing how frightened they are about buying goods on the net. Some had useful links to blogs explaining how unscrupulous firms use the term ‘Google’ to make money, but after reading this I can see that Gorge Brown (the product’s creator) has created a title that links the term with another so making a new identity – Google Sniper. I’m not a lawyer, and so have know idea how this would stand up in court but he’s not strictly misleading people by saying that Google is going to make you money – his product is a separate animal.

There were some interesting comments about the miss use of McAfee images/seals but when I ran through all the checks on the links I have, all were true to the appropriates site, in particular when clicking through on the ClickBank payment form – which is the one you need to know is secure.

There were a variety of people trying to send me to review sites with links that didn’t work – or with one I ended up on a Polish radio site! Completely lost! Only a couple had a good word to say. This was the response from someone who had actually decided to buy Google Sniper,

First, I think it is amazing everyone offers their opinion on a product they have never bought or used, or obviously researched. I researched it, and it is a top ranked clickbank product. Which I notice had an EXTREMELY high conversion rate, and a really low return rate in the Clickbank Statistics. That means people are buying it. It also has a fairly good monthly renewal rate. So it looks like people use Google Sniper till they don’t need it anymore…

Lots of people would rather pay someone for the knowledge bundled in a nice neat package, then waste tons of time trying to learn these things on their own. I would suggest you try it, then if you are not satisfied, get a refund through Clickbank.  I know I did, and I liked it so much in fact I have decided to use it for a while myself.

Argue all you want, I liked hearing from the people who have it, or have used it. I consider those evaluations of value.

I was pleased to hear that someone who had used the product actually found it useful! I had found it in Clickbank too and had thought the same. Apparently it has been at the top of Clickbank for four years, so it is certainly a successful product in this market.

The Warning! post, you can see, was a video, and although short, increasingly irritated me. Jack T Later’s main point was that there is some software Google Sniper uses that helps you duplicate your blogs by ‘scrambling’ up your text and ‘rewriting’ it for you, thus saving you time by producing more content that is different, and we all know how much Google likes our content to be unique. The new reviews are then to be posted in different sites (Bombing). According to Jack the Google updates – Panda and Penguin – are due to Sniper techniques! Alas, this gentleman spent most of his time moving his viewers over to his own interests, insisting we click his link – over and over. His video had 30 unlikes and 9 likes –  that says quite a lot.

However, I do think Mr Later has been very canny. Using the words Google Sniper and Warning in his title – he has attracted considerable views (over 20K) to his own venture; it is still in the top ten for this search term. And notice he’s linked his avatar to his search term too – clever – more clicks!

Now, I have not used this ‘scrambling’ tool, but even if I did, I would ensure that any copy I put out on the internet made sense. I would, as I’m sure any sensible blogger, or article writer would do, read over my articles and check they were coherent. Perhaps more importantly, is the question of how sensibly we use these tactics. Anything that is ruthlessly overused will be shut down. Bloggers do this themselves by shunning people who misuse sites in their community; Google will do this through the vast power they yield across the internet. If we want the internet to develop into a healthy, interesting environment it take a degree of self restraint not to behave greedily.

This links to a very simple review site of an affiliate who is using Google Sniper. It was this site that actually enlightened me as to what the idea is behind Google Sniper i.e. How to target affiliate products on sites that rank highly in Google – First page – and make tons of money through their click throughs and purchases. Oh. So that’s what the fuss is about, because, George doesn’t actually tell you in the video!! It’s just a clever package!

The review site does offer some Pros –
a) it showed him every aspect of the internet marketing/affiliate marketing business, b) it was EXACTLY what he had expected – in fact George actually OVER delivered;
and Cons –
a) The layout could have been a little better as you do end up flipping back and fourth from text to video which can get a little annoying but it’s bearable,
b) Before George starts some of his videos he seems as though he was a little un-prepared. This causes a lot of the videos to run a lot longer than what’s really necessary.

I haven’t used Google Sniper yet. As I said I was looking into it as an affiliate product to recommend on this site. But what’s been most interesting, and led my to writing this article, is how the bloated sales recommendations of a product can actually lead people to dismiss a potentially helpful and seemingly valuable product. It is only $47 (about £37). It’s not going to break the bank. I think I will be buying it – especially as I would like to recommend it.

Lots of messages in this process-

There is no quick fix, just steady, hard work. But it will pay off.

And for those of you who are interested in finding out about Google Sniper yourselves and seeing whether you can actually make money with it, the link is here!

« Passwords – How Safe Are They Really?
Infographics Or Just Graphics? »